01′ Lukaku kicks off the game in Wembley.

04′ Mendy clears the ball and Salah somehow gets on to his head, Luis Diaz gets the ball crosses it and its deflected of Chalobah and Thiago misses the ball which was tool high.

06′ Salah wins the ball again and his cross goes directly into Jorginho’s face.

07′ Salah gets tangled up with Jorginho on the wing and it could very easily have been a penalty but Jorginho does well.

08′ Luis Diaz receives the ball again and squeezes the ball in but both Salah and Mane cant reach it.

09′ Its Luiz Diaz again and he’s one on one with Mendy and he gets fingertips to it, then Keita shoots but its wide of the post. It seems like Chelsea are playing away.

13′ Trent tries crossing but its blocked and out for a throw in.

15′  Luiz Diaz is caught offside after yet again running onto a ball.

16′ Lukaku handballs it in the Liverpool box and Pulisic’s shot is marginally wide.

17′ Kovacic wins his side a free kick outside from the box product of Thiago’s tackle.

20′ Mendy ends up heading the ball as Mane chases the ball outside the box.

21′ Robertson keeps running and shoots but its much too high and will only go down as a shot in the stats.

23′ Reece James touches the ball and passes a simple ball down to Mason Mount who passes a ball across the floor and Pulisic shot is slow and barely wide.

26′ Salah gets tackled by Jorginho after good build up play with Mane outside the box.

27′ Marcus Alonso stretches his shot and Alisson stops it going in after Pulisic passes it to his left. It was quality from Alisson.

31′ Both Alisson and Salah are now injured, Alisson from his save and Salah’s case is not known.

34′ Pulisic again misses on the left hand side and his teammates don’t seem to happy about it.

36′ Trent Alexander- Arnold takes a long shot but Kovacic blocks the shot with his head.

38′ Kovacic shoulder budges Mane with power and wins the ball of him.

39′ Mane steps on Jorginho’s foot as both go for the ball.

41′ Lukaku and Mount attack together and Lukaku gest the ball, he tries chipping it over to Mount but its intercepted.

42′ Konate shoots from outside the box and it makes it more obvious why he doesn’t play sticker.

43′ Naby Keita kicks Jorginho to try and win the ball and Chelsea are awarded a free kick.

45′ Kovacic makes a mistake and Keita wins the ball on his way Kovacic grabs but he keeps on going. Robertson swings a ball in to Diogo Jota who sky’s it.

45+1′ Lukaku misses on his stronger left foot and it goes over the bar.

45+4′ The half is almost over and its safe to say to Liverpool have been the slightly better team.

HT’ It looks as though Liverpool have dominated from the possesion stats which show them with 60% and Chelsea on only 40%. While Liverpool have also had more shots.

46′ Mason Mount is offside and lets Marcus Alonso runs onto it and he crosses the ball to Lukaku who misses.

48′ The free kick hits the cross bar and Alisson gets it.

50′ Diogo Jota takes down Marcus Alonso and its a free kick on the touchline near the halfway line.

51′ Andy Robertson messes up the header and it bounces of his knee for a goal kick.

52′ Luis Diaz receives the ball from Diogo Jota and shoots on the box line but its slightly wide, Mendy would have been hopeless between the posts.

54′ Mason Mount dives onto the ground as Virgil Van Dijk touches him and the referee ignores it.

55′ Trent slides in to stop Mount getting anywhere near the ball.

56′ Marcus Alonso is inches away from getting the ball after a beautiful curling ball courtesy of Reece James.

58′ Liverpool’s high press gives Chelsea a throw in but any slip up would cause a good chance for Liverpool.

60′ Luis Diaz is taken down but its no free kick and Chelsea continue with the ball.

61′ Jota shoots and yet again its wide, both teams have had low quality in front of goal all game.

62′ Robertson puts in a wonderful cross but no one gets there and in the end Marcus Alonso doesn’t risk it and puts it off the pitch for a corner.

65′ Naby Keita puts in a shot from a position that looks like it would be better if he crossed it.

69′ Luis Diaz shoots, this time curling it in to the top corner but its wide.

71′ Rudiger takes Luis Diaz down but its not even a  free kick let alone a card, despite it being outside the box.

73′ James Milner comes on for Naby Keita who’s put in a job at centre midfield.

75′ James Milner took down Reece James in the Chelsea box.

77′ Reece James takes Thiago out and he may get a yellow card.

80′ Diogo Jota is running past the defence when he goes down and he claims he got caught.

81′ Marcos Alonso shoots but Alisson makes an easy save.

83′ Luis Diaz unleashes another one and its off the post and out for a goal kick.

84′ Robertson misses an open goal following Milner’s cross, he hits it off his shin and onto the post. What a tight game that could change at any second.

87′ Mason Mount kicks at Trent’s heel and its a free kick where Trent regularly crosses from.

90′ Luis Diaz run past Thiago Silva and bends it in but its not close enough.

93′ The ball is too high and Marcos Alonso cant reach it.

95′ Trent makes a rookie mistake and looses the ball.

96′ Konate clumsily tackles Ziyech and it looks dangerous but no penalty is given.

97′ Alonso tries getting past Trent but he’s too smart for the tricks.

98′ Firmino comes on for Luis Diaz which will be Liverpool’s last substitute.

99′ James takes on the shot from outside the box and its over the bar.

100′ Ziyech crosses the ball and its left to Trent to clear the ball which he does.

102′ Kovacic swings a cross in from the free kick but its wide and no one reaches it, its a corner now for Chelsea.

105′ James Milner tries chipping the ball to Trent but nothing comes off it.

HT’ Both sides are 15 minutes away from penalties but its not to forget that both will want to clinch it in extra time.

107′ Ziyech crosses the ball into the box and Mason Mount jumps on the floor and nothing is given for it.

109′ Konate physically shoves Kante out he way despite his clear pace advantage.

111′ Robertson comes off and Tsimikas comes on, it looks like Jurgen Klopp wants some life on the left side.

116′ Tsimikas is taken down by Reece James and its a free kick.

120′ Trent whips a free kick in and Diogo Jota goes down outside the box.

120+1′ And it will go down to penalties after a 5 minute break, last time we had a similar situation in the Carabou Cup were Liverpool won 11-10 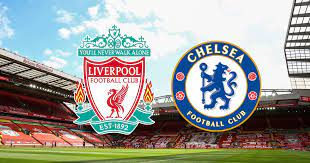